Returning to My Roots

Greetings, dear readers.  It's been a minute, hasn't it?

When last we spoke, I was trying desperately to clear my desk of lingering decoder installation projects so I could, in a word, get on with my life.

Well, getting on with it I have been, and I'm happy to report that once again the whir of tiny gears and the flash of headlights have once again made their way into my sensory sphere.

In a nutshell, I've settled into a wonderful domestic relationship with a wonderful partner with whom we enjoy many mutual amusements.  What started out innocently enough as "craft night" at the kitchen table, where we would have our kids over for dinner, then foist various birdhouses to paint or beads to string, or jars to fill with colorful sand etc... has evolved into an nearly full on return to the hobby.

You see, Rhodana (my lovely soulmate) has discovered the joys of handmade soap.  Let me explain.

For Christmas a few years ago (2018 for those of you keeping a notebook) she received one of those kits you might find at Michaels or Ben Franklin, where you take a blob of meltable soap, melt it, then pour it into molds to make smaller blobs of soap, which can then be hastily wrapped (by me usually) for distribution to those acquaintances and relatives that you don't see until several day AFTER December 25th, so you have time to conjure up something unique and interesting... and conveniently at hand.  Well this proved to be a most satisfying endeavor, and so it began. 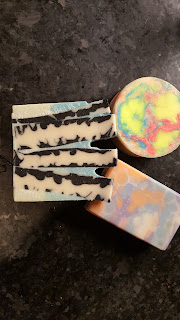 First she found a website for "The Soap Challenge Club"in which soap makers of every stripe follow a monthly set of parameters and make their own crafty soaps.  The entries are then photographically submitted, then the soapers enthusiastically vote for the ones that are the best, after, of course, they've cast a vote for their own first.

The result has been many industrious evenings around the kitchen counter watching her now blend together ingredients and whip them together into colorful, wonderfully scented  and artfully crafted bars of home made soap.  By Thanksgiving of 2019, she had produced a wonderful array of bars, plus shampoos, beard balms, shave soaps, and hand lotions, and set up shop at a local holiday craft show, at which her sales were wildly successful.

So what does this have to do with me and my trains?  Well, if one of us is going to be engaged in a wonderful, creative pursuit, then why not both of us?

My re-entry also began last Christmas season, about the time I had all but given up on the idea of building a layout anytime before my eligibility for Social Security payments, my dear cousin John showed up at my mother's house with a storage tub that he thought I would know what to do with.

It turned out to be the N scale trains we used to play with when we were kids back in the 70s.  Suddenly, I completely forgot all those quizzical looks I would give to "old" guys at train shows foraging through bins of crusty Lionels and Flyer sets.  I thought they were nuts, wasting money on those old broken down toys, mired in ancient technology, all soggy with nostalgia.

The hook was baited by my cousin, but it was set by what was to be an exercise in morbid curiosity while scanning eBay.  I wondered if that one locomotive that I simply had to have back in 1976 was even a thing anymore.  I typed in B&O N scale Pacific, and within 10 seconds I was staring at the very locomotive that was the heart of my desire when, during my pre-adolescence I stood glaring at it through the glass at Lloyd's Hobby Shop in Towson.  And not just one.  There were several available. 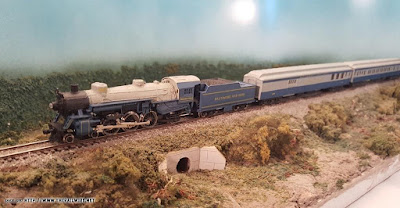 Ebay being eBay, most of them wanted a princely sum to add this fantastic beast to my fleet.  But I knew better.  When I was 12, I sure couldn't afford it when it was selling new for $39.99.  I sure as h*ck wasn't going to shell out $90 for one now!  Then I stumbled across a basket case Rivarossi Pacific.  It was black, Santa Fe, I think, but it was available for ridiculously low price.

And so it began.  Since that time, and especially with the advent of the COVID pandemic, I found myself with lots of idle time to monkey around with a new project layout.  After a couple of fits and starts, I settled on a Hollow Core Door plan of my own design, which featured an upper and lower level consisting of a couple of loops with the idea being to just run trains and have some fun doing it.  The very simple track plan involves a double track main line loop on the low line, with both track splitting behind the sky board to form some staging tracks, and a single track line on the upper level.  This also splits behind the back drop, as well as diverging to an alternate route on the front of the layout, sort of a branch line.
Over the past two years, I've been steadily adding to it, playing around with scenery, lighting, and of course, vintage rolling stock.  I call it my N Scale Hi Rail layout.  The moniker "N Scale Hi Rail" isn't new, I recall my old friend John Craft using the term back when we were building the WMRHS layout, using code 55 rail and trying for a higher level of detail than typically seen in N at the time... He was an S scale modeler, and the "scale" models were differentiated from the familiar American Flyer "toy" trains by designating the latter as "Hi Rail".  The comparison works well, in my mind.

Hi Railers have different goals and standards, but still fundamentally enjoy the hobby.  My goals for this project have moved around a bit, starting with the idea of using old school technology to run old school trains, but that just proved to be impractical.  Some of that old crap was genuinely crap.  So, the focus now is on the "Hi Rail" vintage trains, cleaned up and in some cases fixed up to work a little better, but keeping for the most part their original appearance and vibe.  And different from the purity of the "collector", my goal is not to preserve corpses in formaldehyde in a look-but-do-not-touch mode, but rather to let these old models stretch their legs a bit, running loops for hours on my hollow core door.  Still no DCC or fine scale track, still no high-falutin' time table or car cards.  Just fun old trains run in circles for the amusement of an old guy fondly recalling the simplicity of youth.

I've arranged the scenery around the layout to represent the upper Potomac River valley between Harpers Ferry and Cumberland, Maryland, where the old Baltimore and Ohio followed the river's edge, while the newer Western Maryland straightened out the river bends via a series of magnificent bridges and tunnels.  It's one of my favorite places on earth, which should surprise no one who has ever seen any of the model railroads I've built over the last 40 years...  If I was Richard Dreyfuss, I would make Stickpile Mountain out of mashed potatoes....


Meanwhile on the upper loop,  I can run some of my more scale models of Western Maryland gear, or more frequently, I run older WM models that were available in the 70s and 80s.  But let's face it, with collecting old trains, in for a penny, in a for a pound, eh?  I started accumulating all manner of curiosities.  Some I remember having when I was a kid, and some I remember WANTING to have, but never quite having the coin to pull it off when I made my living cutting lawns and serving the evening newspaper...So for the last two years, I've been running old trains, usually after an evening of cleaning, oiling, and otherwise fixing them.  And this has become my new passion in the hobby.  The simplicity of a DC power pack, the nostalgic roar of those brass gears, and the heady aroma of ozone sparking out of those old 3 pole motors as they speed by has re-awakened my joy with model trains.
There's a lot to catch up on, and in the coming entries, I'll be sharing more of what I've been up to.  If you'd like to follow along, you can visit the Facetoobs, and look for the group "N Scale Hi Rail" and thumb through the posts I've made, as well as those of some modelers who are similarly afflicted.
And just in case you missed it, you'll be glad to know that the Cumberland Station model I completed in 2012 is now installed on a pair of TTrak modules I built, and are ready to go to N Scale Weekend in Altoona this September.
See ya next time!
Lee

Posted by Lee Weldon at 3:43 PM No comments:

New Year!  It's now January 22, 2015... New update on loco work.  Here's the latest.
Finally, everything on the list below is completed.  The final shipment should be going out in a couple of days.

I'll be accepting new work again shortly.  I have a couple of  warranty jobs I'm working on, so contact me if you have some engines you'd like me to perform surgery on.  I have updated my price list, feel free to check it out here

As always, if you have any questions, don't hesitate to contact me at wm3798@gmail.com.

Posted by Lee Weldon at 2:23 PM No comments: