Innovation comes when ideas can be played out in real time to determine what's practical and where the limits of that practicality might be.  My gradually evolving scenery work for the City of Cumberland on the layout is based partly on experience gained on previous layouts, but also on some experimentation with new techniques on other parts of the layout.

For instance, having been traumatized as a child by a complex day/night lighting scheme on our Christmas Garden, devised by my overly artistic father and my diabolically technical older brother, I can't accept a cityscape that doesn't include a vast array of lighting.  When the room lights go down, the city streets have to be properly lit, buildings should have the appearance of being "lived in", and generally, the skyline should attract "oohs and ahhhs" from onlookers. 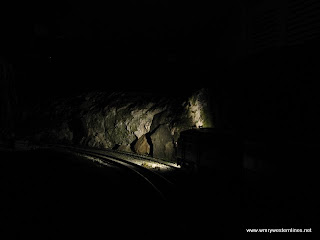 No, it's not enough for the headlight of a train to wash over the landscape as it passes.  There has to be more.

In the past, I've lit my scenes as cheaply and easily as I could, using old strings of Christmas lights snipped apart and wired into a 12 volt circuit supplied by the power pack.  Exterior lighting was provided by commercially available streetlights, purchased when funds allowed, or salvaged from older layouts.  The look worked, but often suffered the pitfalls one generally encounters when dealing with incandescent lights.  Heat would build up, bulbs would burn out, and there's always the issue of size....  When I built this switch tower, for instance, all I had at my disposal was an old street light which used grain of wheat bulbs... 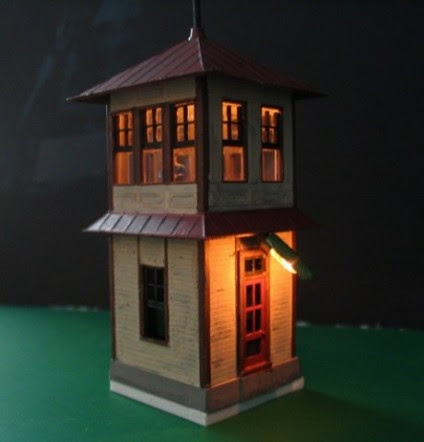 Not too bad in a dusky setting, but when the house lights come up... 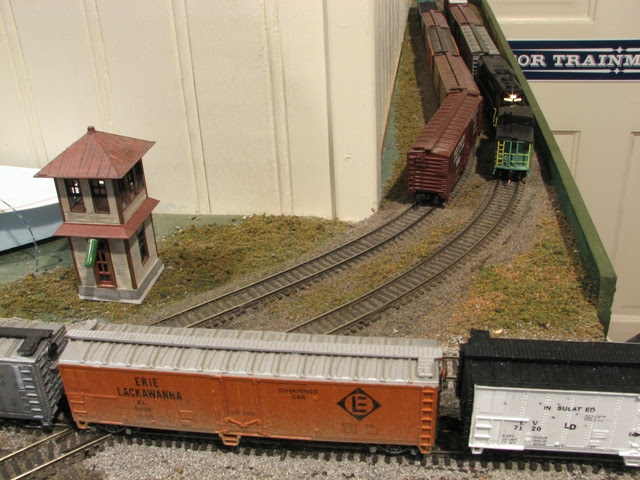 ... well, let's just say there have been a few prurient jests from the operating crew...

Recently, however, I've discovered the joys of LED lighting.  I've been putting LEDs into locomotives for a few years, and I've read with interest about other uses for them.  I even experimented with lighting a round house I was building using old LED light boards pulled from locomotives I'd installed DCC into.  I generally liked the results, and started looking for ways to do more.  When I discovered a good source to purchase large quantities of them on-line for a very reasonable price, I decided to finally take the plunge.  The first thing I dabbled in was simple interior and exterior lighting for the back shop building at Ridgeley. 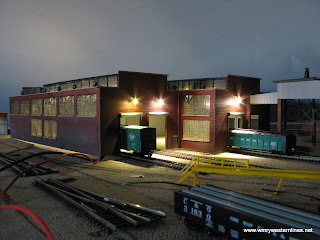 I strung a couple of bare wires through the rafters inside the building, and drilled some holes over the roll up doors, soldered a few connections, and bingo.

But an urban setting needs more finesse than a big old shop building.  Exterior lighting consists of small fixtures next to doorways, lampposts with relatively small globes or overhead "cobra" street lights.  Interior lighting has to be softer, and some rooms should appear to have no lights at all.  Then there's all those other lighting situations, such as bill boards, alleys, passenger platforms, and more.

LEDs are available in a variety of sizes and colors, including the latest surface mount types, which are absolutely tiny.  I haven't started working with these yet, but I'm keen to try.  In the mean time, I'm using 3mm and 1.8mm sizes in a couple of colors with a fair amount of success.  I also accidentally purchased 100 5mm super bright white LEDs, which have worked out in a couple of situations.

The first project I tackled using this variety pack was the freight terminal for Cumberland.  Its location under a highway bridge gave me an excuse to go a little overboard, since it both needed a little extra lighting to get noticed, but it's out of the way enough that if I didn't like it, I wouldn't have to see it much.  Anyway, here's how it ended up:

I used 1.8mm for the exterior light fixtures to represent soda-vapor lamps, the interior of the main warehouse is some of those 5mm uber brights, which has a bluish cast similar to fluorescent lights, and a 1.8 mm white is in the office annex. 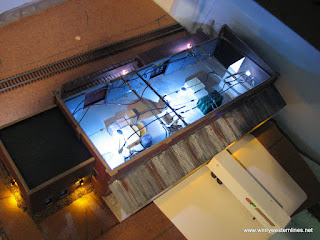 You can also see two exterior lights on the rear of the building in white.  These will wash the background buildings as well as illuminate the track-side of the warehouse.  You can see two pairs of old code 80 rail running front to back.  These carry the juice, as well as the roof structure.  The lighting is all tied to a "pigtail" made from phone jack cord with a modular plug at the end.  The idea is to be able to unhook the power to lift the building out, should it need to be repaired at the work bench.

This project gave me the confidence to try my hand at a more conventional city building, but I'm not quite ready to start building the downtown blocks in Cumberland.  This will involve some other techniques I've developed for creating a realistic urban landscape on a hill, which we'll discuss later.  So I looked across the room to the little section along the wall I call Greenwood.  There will be a cluster of small town buildings here, and they will make an ideal test bed for some of my lighting ideas.  Let's take a look. 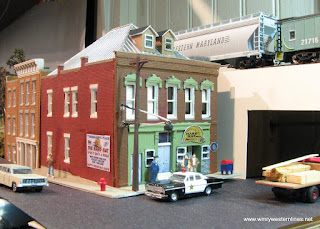 I started with the DPM building that I modified to resembled the fabled "Hard Hat" bar in Newport, PA.  I wanted to realistically light the bar area like the smokey dive that it is, as well as a couple of apartments upstairs.  Street lighting was also going to be tricky here, given the close quarters I was working in.

Using a smattering of LEDs, I think I have the inside and outside done to my satisfaction.  First, let's look at the front side. 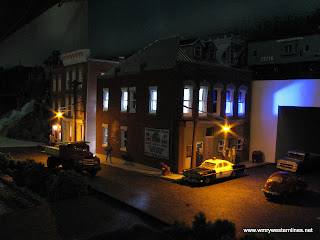 The streetlight is a 1.8mm yellow LED that I filed down to be shaped more or less like a cobra head lamp mounted on a pole.  If you look closely, you'll see that I simply used the anode and cathode of the LED to form the arm that extends over the street.  They actually extend past the pole and into the building, where thay are wired in to the building's lighting circuit.  I painted the extension between the wall and the pole black to minimize the attention they get.  To get the streetlight to look more realistic, I painted the top and sides of it with black paint, then over that I brushed a coat of silver acrylic paint.  This eliminates light leaks from the top and sides, and reflects all of the light down to a pool on the pavement.  I used a blue 1.8mm LED in the upstairs apartment to give the effect of a TV running, probably with the Late Show on...

Around back, I wanted to make sure the Hard Hat's patrons would feel safe walking past the alley, so I added a wall mounted fixture over the kitchen door. 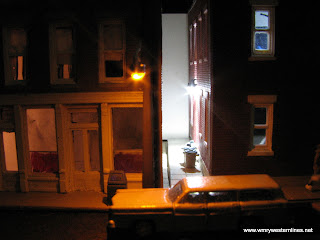 The building behind it represents a business that might not be open as late as the bar is, so the lighting is dimmer inside, accomplished with those dreadful amber light boards from older Life Like locomotives.  They're perfect for this application, though.

So, I'm now pretty satisfied with the method and outcome of lighting structures with LEDs.  Next step will be to do the secondary benchwork to support the several blocks of Cumberland, and get started on arranging the structures.  Stay tuned!
Posted by Lee Weldon at 1:13 AM No comments: