I've pushed the last couple of engines across the work bench I can push before I stagger headlong into the Christmas Season.  There's family to see, highways to travel, and a million things that are going to be a higher priority than tinkering with little wires and blobs of solder.

I do have a break from work for about 10 days, so it's possible I might fire off one or two easy ones, but I doubt I'll be able to do that, so I won't promise anything.

You can check back at the November post for updates to the completion/shipping schedule after the first of the year to see how things are shaping up.  I'm feeling good about the progress I'm making, especially on some older ones, such as this trio that first came into my life in the fall of 2011.

Their owner had requested a fairly complex installation to provide for rotating beacons.  After a couple of months, I finally got the small LEDs I needed, then I took them apart to prep the frames, then they sat and sat and sat while I pulled myself through the muck of straightening out my personal life.

Well, they're done!  I had dreaded all the tinkering the beacons would require, but once I got the first one done, the rest of them went pretty easily.  So they're in the mail tomorrow morning, heading home to Michigan.

So, onward and upward, and into the New Year.  I'm looking forward to finishing the remaining handful of engines soon, so I can feel better about accepting a few new ones to work on at a more leisurely pace.  I'm also plotting and scheming about developing a new, albeit smaller, layout project.  As always, stay tuned.  Same Bat Time, Same Bat Channel!

Posted by Lee Weldon at 9:06 PM No comments:

I want to thank everyone who has stayed in touch with me as I've made this transition in my life.  By way of a brief update, the layout has been completely dismantled, parts of it are stored in the garage of my new home, part of it have been disbursed to friends and former crew members, and parts of it have, like so much historic railroad equipment, met the torch... 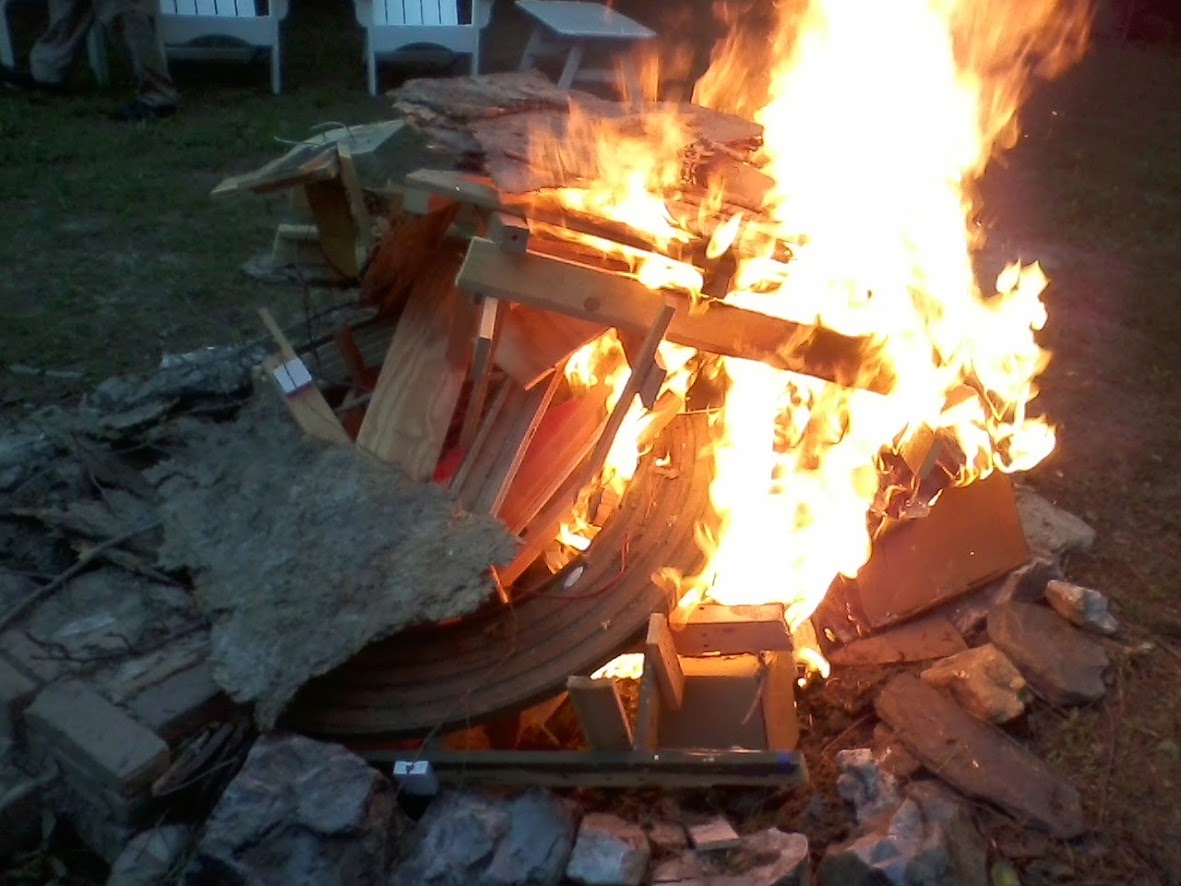 It was quite cathartic to set the old east staging yard alight...  It performed admirably when it performed, but it was one of the many engineering nightmares I endured due to my desire to have 10 pounds of railroad in a five pound room.

On the personal side, I'm doing quite well.  My relationships with my kids are stronger than I think they ever were, and most of the rest of the people who care about me are happy that I'm happy in my new domestic arrangement.  I think I've found someone quite special, and we are both enjoying life quite fully, as well as each other. 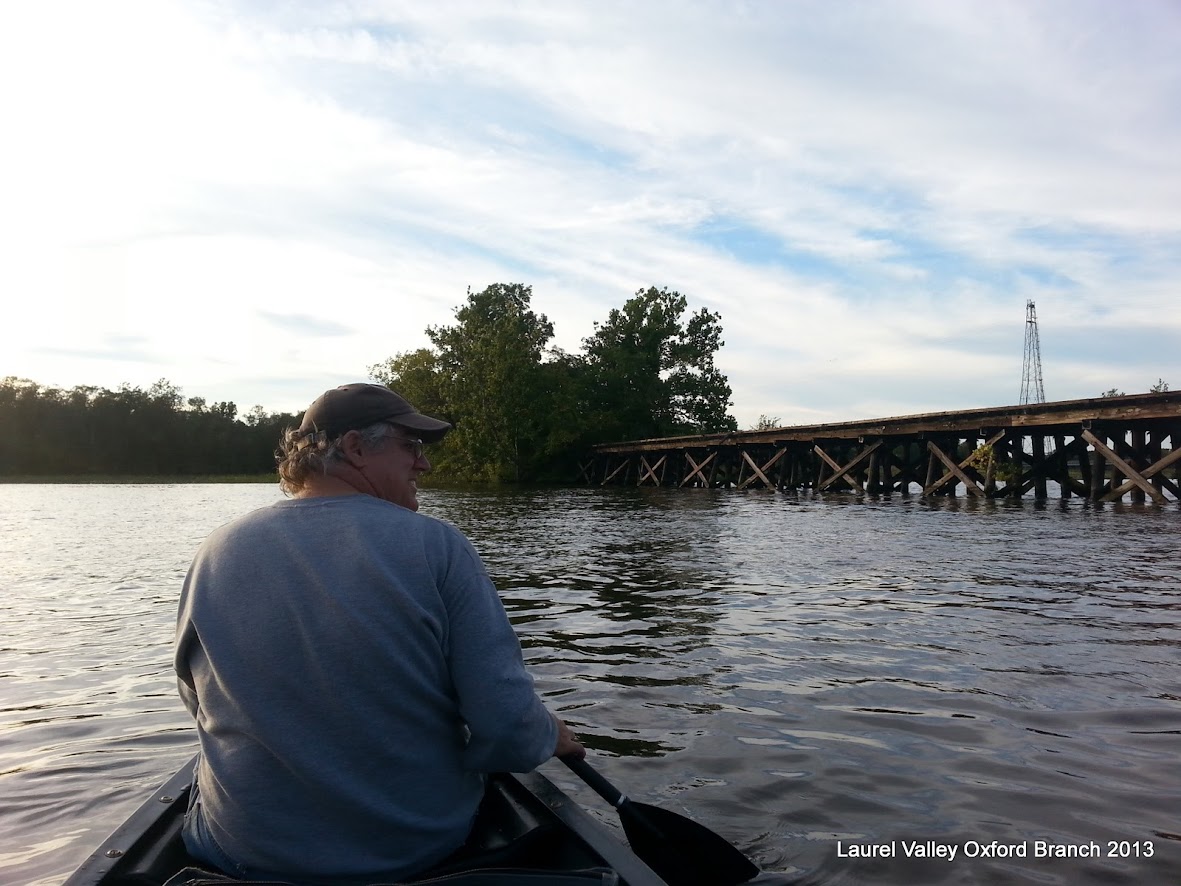 For the several people who have sent me your locomotives to work on, I will continue to apologize for the delays in finishing them up and returning them to you.  Between work at the ReStore, working on my old house to prepare it for what ever's next, and making sure that I don't miss a sunset, my productive workbench time is quite limited.  However, one of the things I'm trying to do is keep all the promises I've made to everyone, and fulfill all my obligations as quickly as I can.

To that end, I will be using this space to keep everyone posted on the progress of the work, so you will be able to see what I'm working on.  I have a spreadsheet of all the projects currently on the hook, as well as those I've completed in the last year which I will be sharing with you.  I'll post the information referencing only locomotive types and road names to protect the innocent, (which after all this time certainly is NOT me!!).

Again, thanks for all your feedback on the column in N Scale, which will be continuing, as well as the support you've shown to me generally.  I'll have the spreadsheet available shortly.

Beginning of the End, and a New Beginning.

Starting on Saturday, February 9, I began the process of dismantling the Western Maryland Western lines N scale layout.  I spent a few hours running two extras to clear all the rolling stock from the outer reaches of the railroad.  The first was a move up to Elkins Yard, where a couple of dozen hoppers were left.  These would be brought down the hill in two sections, with stops in Thomas and Luke to clear a few cars from those locations as well.


A short time later, the final train from Connellsville appeared on the "new" line along the Youghiougheny River.  Led by Laurel Valley locomotives 1803 and 1802.

On Sunday, 2/10, the crew came down to Cambridge to help cut out the peninsula and move it to its new home in the Baltimore area. 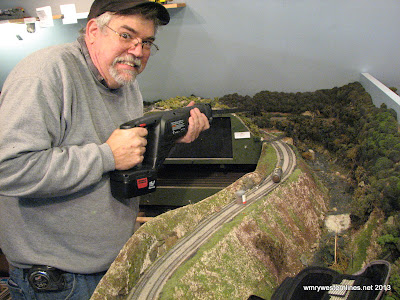 Here's how it went down...  We got started around 10:30 a.m.  We dismantled North Junction to make room in the doorway, then the cutting began... 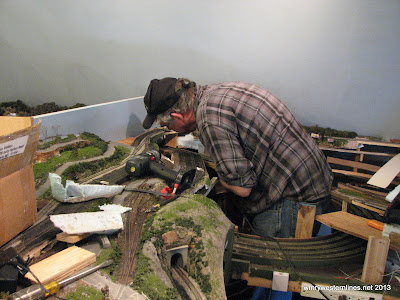 While I was hacking away at foam and sculptamold, Ed and Tim worked on boxing up the remaining rolling stock on the layout.  The last car to officially turn a wheel on the railroad was a B&O bay window caboose of no fixed prototype.

Work on detaching the several layers of track and wiring went on for about an hour.

Brian (Rock GP40) showed up around 11, then we went to lunch to power up before attempting to move the behemoth down the steps.  Plaza Tapatia was the weapon of choice, with ammunition provided by a couple of 32 oz Dos Equis Grandes.

There were no photos taken of the actual move.  It was all hands on deck.  We got it out of the room easily enough, and then turned it over to slide it down the steps, but the 64" wide bulbous end (Andy calls this the "Scrotum") simply wouldn't make it through the opening.  We had to heft it back up the steps twice to trim portions off.  Finally we removed the high bridge and the entire subroadbed that had supported the Shaw siding, and this allowed us to get Elvis out of the building. 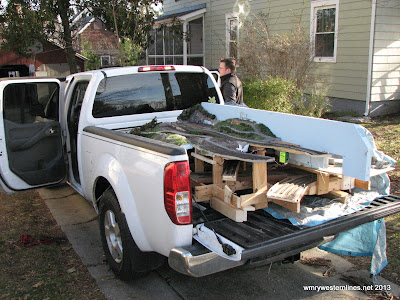 We loaded the main section into my girlfriend's pick up, and all the remaining bits and pieces from the surgery into the cab, and headed across the great waters of the Chesapeake toward Eric's house near the airport.

Once at Eric's, we found the path to the basement to be relatively straight, but not without challenges.  We had to move the picnic table over to the steps from the car port so we could gain enough height to heft it over the railing and into the house.  We had to remove both the exterior door and basement door from their hinges to provide enough clearance.  Again, there wasn't a stray set of hands to work the camera, so you'll have to take the word of the witnesses.

With only inches to spare, it fit over the railing, under the carport ceiling, through the two doors, and down the steps.  Due to bad planning, Eric ended up at the bottom of the steps by himself as the full brunt of the peninsula went down the stairway.  Imagine standing out in center field by yourself trying to field a fly ball that happens to be as big as a submarine.

Anyway, we recovered, got it down the narrow aisle next to Sunnyside, and spun into position at rest on a temporary table. 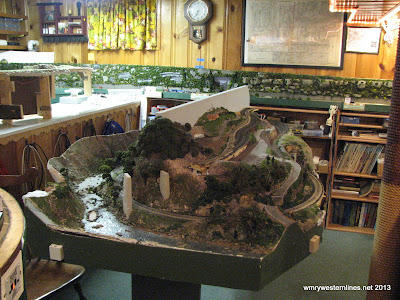 The next challenge for Eric and the crew is to work out the elevation changes of the peninsula and marry them to the existing shelf layout along the wall in the background.

I appreciate the hard work and ingenuity that went into this move, and I'm now anxious to get the rest of the layout moved along to be stored or incorporated into another layout or three.  I also appreciate Eric generously offering to make a home for this favorite piece of work.  I'm looking forward to helping to tie in the scenery, and to running some Laurel Valley power up the Yough Valley once again. 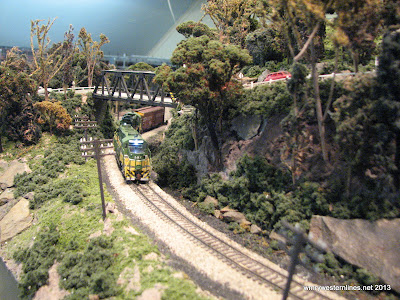