If you've ever built a model railroad, and who hasn't, you know there are a lot of things that involve mass production. Whether you're fabricating grab irons for your boxcar fleet, or installing couplers, or putting in switch throws, there's a fair amount of repetitive motions.

That being the case, you'd think that you could make your parts, set up the assembly line, and start cranking things out. But there's always that one piece that doesn't want to be like all the others. There's that one coupler box that wants to pop apart when all the other ones snap together tight. Or the switch throw, that no matter how much you tweak it the points just don't close one way or the other.

Such was the case last night as I endeavored to install the slide switches in the new engine terminal. I put in three with virtually no effort. Drill a hole, insert the throw rod, wire the contacts and in she goes. Then came Number Four. 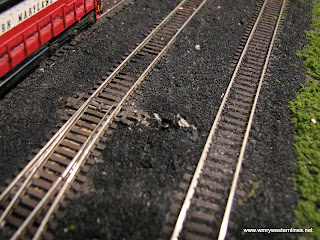 I don't know if it was just getting late, or if the second cup of coffee wore off, or just what the problem was, but this particular switch just didn't want to go in. At first, it was a simple matter of the points not closing in one direction. This is usually fixed by adding a bend here or there in the rod. Well, that got it closed the way I wanted, but shot the other direction.

So I tried a different approach, running the throw rod through the handle the other way. Well, in handling the switch this time, I managed to break off one of the wires...so, back to the soldering iron. I put Humpty Dumpty back together, and still no throw. Grrr. Turned out the rod I used was too small for the hole I drilled, and it was slopping around just enough to keep the points from moving or holding tight.


Finally this morning, with a fresh cup of coffee in hand, I resolved to start fresh with a new slide switch. Five minutes later, it was done. And so it goes...
Posted by Lee Weldon at 10:56 AM 5 comments:

Just a quick note to update you...

The last of the public works crew has emerged from the manhole, and declared that the primary power bus for the mighty Western Maryland Western Lines is hereby complete. At least the parts that I needed to crawl under the yard for. (Still need to run about 6' between the sections on either side of the window).

The final major wiring project will be the control bus. That's all right behind the fascia, though, so it will go in pretty quickly once the necessary materials are assembled.

So, tomorrow night, God willin' and the creek don't rise, I can clear the aisles of all the crap that I pulled out from the gloom beneath the benchwork, and actually access the entire layout without fearing a broken ankle.

Once completed, the final section of benchwork for the yard gets installed...

For the last two weeks, I've been making pretty steady progress on all the tedious work I described in the last entry. The main line is now complete, the drop leaf in front of the closet door has been constructed, tracked and wired... and even a modest bit of scenery applied. 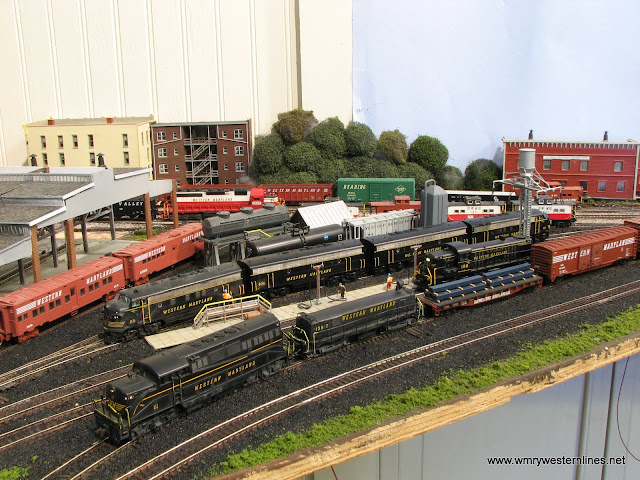 I've also gotten to the point where I could re-install the turntable and get it functional, so the roundhouse will likely be moving to the front burner again soon. It's a big, unweildy beast, which I was hoping t0 be able to work on at the workbench, but it's fairly close to the aisle, and the table height is about right to be able to sit on a stool and work on it, so I'm okay with that. Wiring in the lights will be a bit of an adventure, but I worked out the kinks of my process when I did the Elkins Roundhouse from scratch a couple of years ago.

I'm going to install a 12 position rotary switch, which will allow me to leave the roundhouse tracks dead, with the ability to turn on two tracks at a time to move engines in and out.

I've also dreamed up a panel that will indicated the outbound switch positions in West Staging. I've already rigged them up to just about impossible to come out against a switch, but it will be fun to have a visual.

So, basically... where I am at this point is very nearly complete, at least in terms of infrastructure. The main line is complete from east staging, through the yard area, then to Cumberland and Maryland Junction. From there, the main proceeds around the peninsula, along the front wall, down the helix and into West staging. Also, from MY, the Thomas Sub is complete from there up through Thomas, up another small helix, and into Elkins on the upper level.

I can't wait to get all of this boring wiring and trackwork done, so I can get back to the scenery, the part I really enjoy!

Impatience is a Virtue 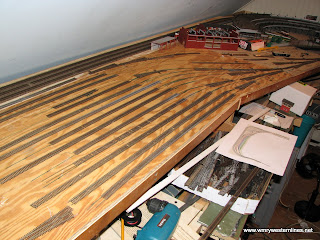 As a follow up to last week's entry, I have to confess that I've made a career out of placing carts in front of horses.

Adamant as I was about doing the messy, time consuming and virtually invisible wiring that needs to be done to make the staging yard under Ridgeley work properly, sadly it remains undone. I got all in a tizzy yesterday (my day off) and cut the panels needed to not only finish the main line, but also to situate the massive 20 stall roundhouse I've been fooling around with since last February.

Not to worry. Most of the panels remain loose, so I can still root around under the belly of the beast to do what still needs to be done.

...But not until a train is running the entire circuit...

Hopefully later tonight!
Posted by Lee Weldon at 10:25 AM 1 comment: