Everything Old is New Again!


Back in ought one, or whenever it was that I first discovered the interwebs, I quickly recognized that there was an opportunity to learn from other model railroaders, and maybe show off a little of the stuff that I was doing. Apart from a few awkwardly run e-mail groups, the first real forum I wandered into was the Atlas board. If you've ever been there, you know it's a pretty good forum, peopled by a lot of regulars. There's a few that are kind of "out there", but there are also some really solid modelers who are quick to share their work, and advice to help even the most bumbling novice find his way to satisfaction in the hobby.

When I first got involved with the forum, I saw the photos that people were putting up, and I started thinking about how I could be a part of the fun. The first challenge was the very real problem that I didn't have a layout at the time! But I had a plan. 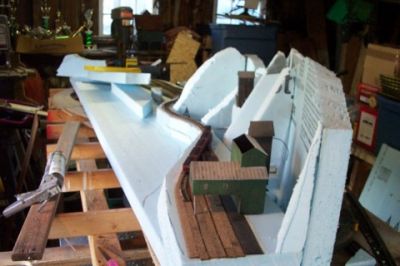 So I picked what I thought would be a good place to start, and... well, started. This piece was to be the spine of the peninsula I had planned, providing not only a nice mountain for a view block, but also a cool switch back to a coal mine, modeled loosely after the WM's Chaffee branch. This is where the Big Six operated, which was the last Shay type locomotive built in the US.

Anyway, I had gotten a digital camera for my job, so I started firing away out in the garage as this pile of foam evolved into something worthwhile. It started to attract a bit of an audience, and I really enjoyed the positive feedback I got from my fellow forumers. 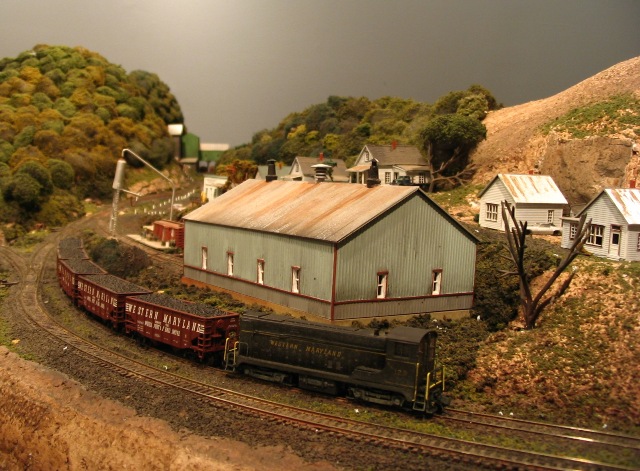 Long story short, I got the Chaffee Branch section, which was about 30" wide x 8' long, to within about 15% of completion, including ballasted track, structures, and even figures on the porch of the structures. For a long time it sat up in the attic serving as a photo background. (A big, heavy photo background!) It was enjoyable, and it was nice to get back into constructing a layout, or even just a part of one, after many years of moving around in pursuit of a career.

Finally the day came when I could get the main portion of my dream plan installed in the attic. The room was renovated, including wiring and new lighting. To make room for the new benchwork, though, I had to displace the Chaffee Branch. This was partly to keep it from getting damaged as the rest of the construction was going on, but mainly because it was just so damn big that I could no longer work around it! You may recall that once the room was renovated, I had to temporarily share the space with Andy, my son, so the room was also occupied by his menagerie of Legos, his desk and his bed. Something had to give.

So, back out to the garage it went, getting placed up above some power tools on a precarious shelf. It was high enough up that the cats couldn't get to it, and out of the way now. The idea remained to ultimately install it as part of the layout.

This was probably five years ago.

It came to pass that Andy moved into his own room, the layout got some temporary construction to allow me to at least run some trains, and finally, I started having some friends down for regular operating sessions. These sessions were very instructive as far as how screwed up my dream plan was. The staging was set up all wrong, and way too small. The yard was too small and in the wrong place... etc. etc. etc. Then there was the big one... The aisles proposed in the "Dream Plan" were way too narrow! Model Railroaders in general are not known for their athleticism. The die was cast... I had to redesign the layout; and not just a little bit.

Which is why we're here now! The good news is that all the good work on the Chaffee Branch wasn't for naught. The other night, wielding an array of artillery, I cut a big chunk of mountain off, and carried the organs up to the attic for transplanting on the layout. 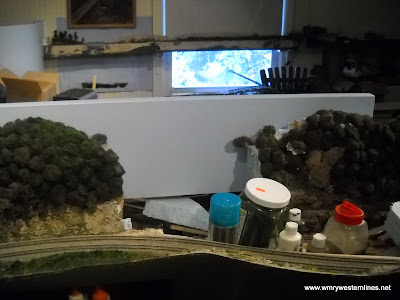 Part of this is due to the fact that I'm cheap. Here was some perfectly good Styrofoam, coated with perfectly good Sculptamold, and tricked out with perfectly good puffball trees! Why waste any of that!? I pulled back the canopy of puff balls, and put the old Chaffee branch cliff up against the new skyboard. I then worked some newspapers and what not into the joint between the new new work and the old new work, and made with the Sculptamold. I use a mixture tinted with craft acrylic paints, usually black and some sort of brown. 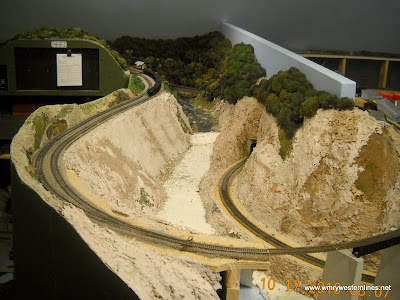 There's still a bit of blending to do, and some more "real" trees to add to the scene to really cinch it, but it looks like the rest of the Chaffee Branch will be an invaluable asset to finishing out the scenery on the peninsula that was supposed to be its home in the first place.
Posted by Lee Weldon at 12:04 AM 2 comments:

I'm pretty excited. Once again, Pam Clapp at N Scale Magazine has exhausted every possible alternative, and pulled my submitted article out of her wastebasket to run in the November/December 2010 issue. To soften the blow for her readers, she's asked me to re-shoot one of the images to use as a cover shot. This way, the readers will lower their expectations before they purchase the issue, and subscribers will have the opportunity to toss the magazine on the burn pile as soon as it arrives in the mail. (What, Me Worry?)

Anyway, just to keep things interesting, the particular composition she wants me to re-shoot is smack dab in the middle of the reconstruction project. So over the last few evenings I've scurried up to the attic after work to repair the damage and perform the necessary reconstructive surgery.

I carved foam, I smeared Sculptamold, and planted trees. Last night I re-applied gloss medium to the river and touched up the waterfall, and it's all coming together nicely. Except, of course, the whole camera situation. I'm still working with a very sub-par point n' shoot, so I'm scrambling to get some help. 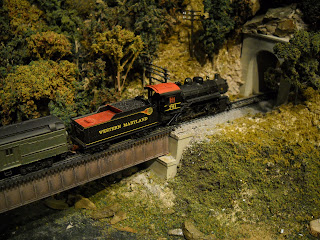 So, Sunday I'm expecting a visit from David K. Smith, the multiple published author, photographer and model railroading bon vivant, who is bringing his DSLR, a bag full of smoke and mirrors, and 1,000 watts of studio lighting. All the way from New Joisey, and all of this for a chicken dinner.

Now, I'm not going to spill the beans on the content of the article, you'll have to pick a copy up when it gets published. (I'm sure you'll hear about when that happens here...) But I can assure you that the cover photo will likely raise your expectations for the article, because the honorable DKS has a reputation for making objects in your mirror appear much closer than they actually are.
Posted by Lee Weldon at 11:06 PM No comments: