When I first conceived of this layout plan, there was one critical element that simply HAD to be there.  A reasonable representation of the shops and roundhouse at Hagerstown, Maryland.

This was the major division point on the Western Maryland, where the East Subdivision branches from Baltimore, Hanover and Shippensburg met the main line to Cherry Run, and then onto the Cumberland Extension to go west.  To support this nexus of east and west, the WM chose Hagerstown to be the location of its primary shops.

Obviously, there was no way for me to replicate the entire facility, especially since I also need to have a functioning model railroad yard in the same space.  But with a little selective compression, a lot of old Heljan roundhouse kits, and some very useful input from my on-line design committee, I came up with a plan that offers not only some of the operating potential of a division point terminal, but also the look and feel of Hagerstown.

My one cop-out, and admission that I can't fully do justice to Hagerstown, is that I refer to my facility as Ridgeley, which in reality was a much smaller yard at the west end of the Cumberland Extension.  This is appropriate, since my operations are more based on the west end than the Hagerstown area, although I do take advantage of thru trains from the east arriving with Reading locomotives on the point.

Anyway, the focal point of the yards will be without a doubt, the engine terminal and shops.  I want to convey the importance of Ridgeley to the operations of my railroad, and nothing can do this better than a substantial set of buildings, complete with interior and exterior lighting to demonstrate around-the-clock activity. 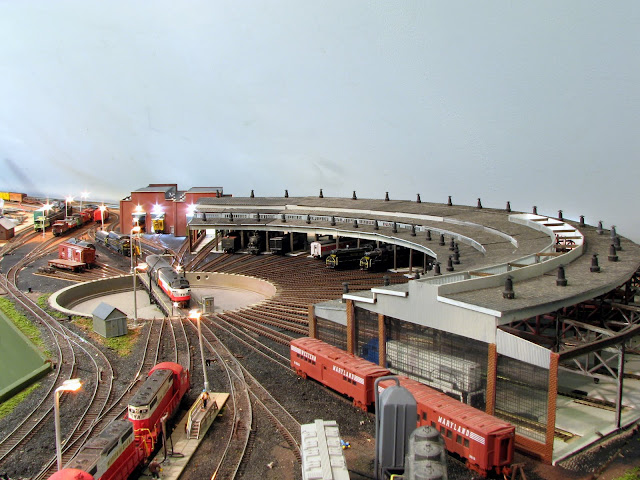 I think I'm getting close to that.  At the far left, you see the two arrival/departure tracks that will serve the yard which will be beyond the left edge of the image.  Next, there is a caboose servicing track, then the westbound ready tracks.  The Walthers 130' turntable anchors the scene, and is surrounded by the car shops and a 20 stall engine house.  The eastbound ready tracks are at the lower edge of the scene.

At the lower left hand corner, the first track to the left is the drill track, where the yard switcher can work cuts of cars in and out of the classification tracks, and the main lead from the main line through to the yard is next.

This will be a very active part of the layout.  As a bridge route with connections to the east and west, lots of run through power from the Reading and Norfolk and Western will make appearances here.  And the steep grades and tight curves west of Ridgeley will require different types of power than the lines east of the yard, so there will be a lot of reasons to change engines here.  Cabooses will also be swapped, as the Hagerstown pool will work east, the Elkins Pool will work west, and the foreign road cabs will have to be turned around and sent back to home rails.

All the while, the BL2 switcher will be slugging it out switching the yard building blocks of cars for various destinations east and west to keep that Fast Freight Rolling.  For me, this is the nerve center of the layout, and facilitates the type of operations I enjoy.  All of them.  I can put together a local to run up the hill to Thomas, or to the paper mill at Luke.  I can pick up a hot cut of cars bound for Connellsville and send them west down the Youghiougheny, or I can spend a busy hour or two shifting cars in the yard to build the blocks for next time.  It's all very satisfying to me.

The best part about using a fully functional model railroad yard is that you never run the same train twice.  Oh sure, maybe you've got a cut of coal hoppers that always seem to make the same trip, but you can even mix them up with the judicious use of car cards and waybills.  And for those times when I want to just send a train around in endless orbits, I have that option available as long as I pay a little bit of attention to a couple of turnouts.  With the staging yards I've built, at the end of the night, I can just bring that train (or two!) in for a landing, make a note of which trains are parked where, and I'm ready to run loops again, or have a full blown ops session the next time out.

Model railroaders who avoid yards are really missing out, in my opinion.
Posted by Lee Weldon at 9:35 PM