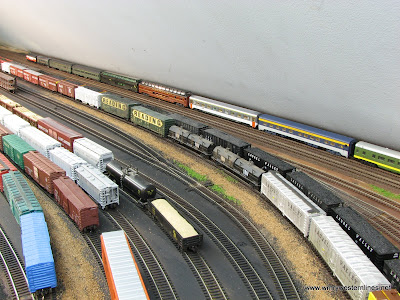 To celebrate the recent completion of my main line trackage, we held a special ops session today for the "Golden Spike Special" made up of cars provided by a number of friends and fans.  During the past week cars have been arriving in the mail, including one shipped from a friend serving in the military that's based in Germany.

Today we welcomed a few more traveling cars from modelers who have been following the progress on my layout through my blog, including a couple collected at the Hershey N Scale convention this weekend.  The highlight was Bryan Bussey's (of Eastern Seaboard Models) magnificent Conrail OCS full dome, shown above just ahead of the PRR full dome Eric220 provided.  (Eric's layout is based on a "What IF?" contemporary PRR that spans coast to coast...)  Sadly the roster shot I took of this car didn't turn out very well, but we did get a peek inside at the neatly set tables and other details: 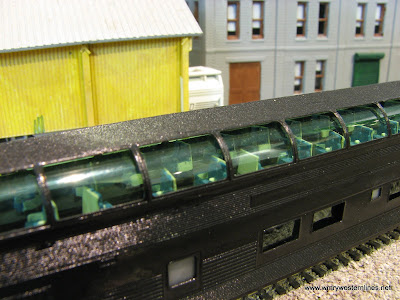 Remember, this is N Scale!


Also had cars from Dave Foxx, Mike Delamaiz, Bob Bufkin, and David K. Smith. Sizemore (Tim Alder) was well represented, having painted the F-unit on the point.  Phil Hoffman brought along some Spanish prototype cars, but they were unable to be included due to some compatibility issues.  According to Phil, this was in keeping with Spanish rail operations...

While the layout wasn't built with passenger traffic in mind, we managed to get the Golden Spike Special around the layout in reasonably good order.  We didn't ever really reach "track speed" owing to the numerous photo and video run bys requested by the crew.  Here's a couple of highlights: 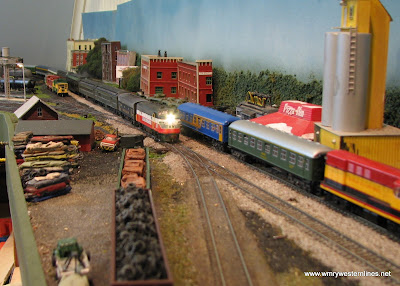 Returning to North Junction at the east end of the layout.  Note that the KCS has spotted the Spanish cars near the scrap yard.  I'm not sure what this means.

The train then headed west again, this time working its way up to Thomas via the Thomas Sub.  Here it is leaving the main at Maryland Junction: 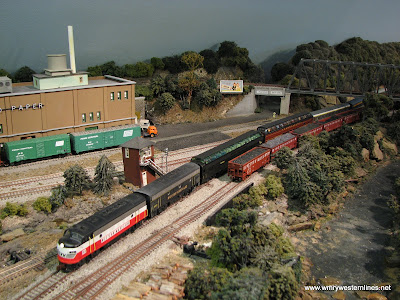 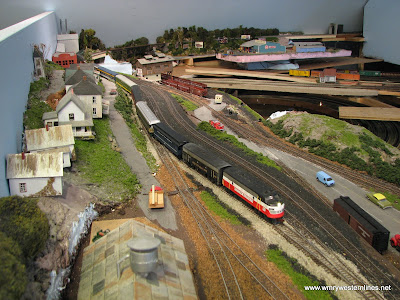 Restricted clearances made Thomas the end of the run, so the engines turned around, and pulled the train back down to Ridgeley. 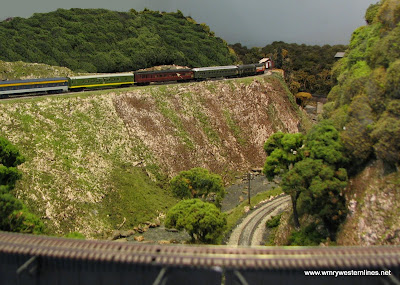 Here it is drifting downgrade at Shaw as the sun starts to fade.

While we didn't get to run many trains, we had a great time.  It was good to see the layout back in action, although we naturally found a few things to add to the "to do" list.  Thanks as always to the crew, who have been such a great support through this whole project. 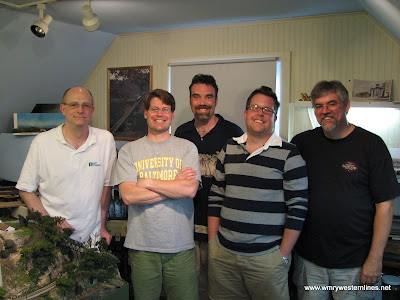 At this point I think it's appropriate to offer a word of thanks to all the people who have had a hand in making today possible.  As most of you know, the economy has really taken a toll on my family, and being able to keep working on the layout has been a blessing beyond measure.  I guess to some extent it's been a good hiding place, but it's also been very therapeutic, and a good way to mark progress on a lot of things, not just the trains themselves.

Anyway, for all of you who helped out, my gratitude knows no bounds.
John, whose layout and approach to the hobby has been an inspiration since the first day I washed up on your doorstep... what is it, 8 years ago?
Dave Foxx, Phil Hoffman, Ed Kapuscinski, Brian Carhart, Bob Bufkin, Carl Tweedale and Tim Alder, my regular crew, who were instrumental in making the jump from the old layout to the new, and who have contributed countless hours and 6 packs to the cause.
David K. Smith, who puts it all into an image that's worth a thousand hours of labor saved... and whose creativity and innovations continue to push me forward.
Jerry Britton, for getting out of N Scale, and showering me with surplus track.  There needs to be bronze plaque on the layout somewhere for you, Jerry.  Literally, the layout expansion would not have happened if not for your kindness.
Bryan at ESM and Craig at Bluford, who helped me pull off the hopper car project last year that financed much of the project.
Eric Payne, Dave Vollmer and so many others who have asked the right questions at the right moments to make me think my way out of various corners, whether they involved scenery, operations or what have you.
Thanks also to Victor Miranda, who helped dig me out of a couple of steam loco situations along the way.
Jason, Mike, Gary Hinshaw, Phil, Tim, Ed, John, Bob, and so many others who were happy to dip into their junk boxes to pull out whatever salvage I needed to finish this project or that.  I've got plenty of leftovers that I hope one day to "pay forward".

So, onward and upward.  Now that most of the railroad is in place, I suppose it's time to start editing those old car cards and way bills!
Posted by Lee Weldon at 1:31 PM