It's the Saturday before the Sunday when the operating crew will show up for an initial shake down run.  The train room is still somewhat in disarray, there's still a few nagging problems to work out, and only a few hours remaining to get it all done.
Since last we chatted, I've gotten 99% of the yard at Ridgeley installed, with switches wired and mechanically connected.
I'd like to get the yard tracks and surface painted before show time, but that will be a time consuming and messy process.  I'll probably do it anyway, dragging the compressor and air brush in from the garage to shoot it with some burnt umber acrylic.  That will go faster than brushing it all on.  Then while the paint's drying, I can do the stuff I have to do, like clean the debris off the floor, put away the various tools, and otherwise make the train room and the crew lounge a little more hospitable.

I'm really looking forward to this session, it will be the first opportunity to try out the systems that I've put in place, and the first peek at the finished track plan for my regular crew.  I'm hoping the feedback I get doesn't involve any major upheavals.

Part of the fun will be running a "Private Varnish" special around the layout, wherein members of my crew, plus a few other fans are sending or bringing representative passenger cars from their layouts.  The first two arrived earlier this week: 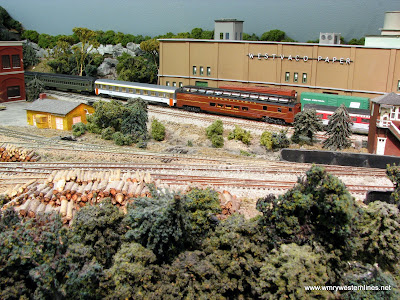 The car on the left is an SNCF (French National Railways) coach that was shipped in from a fan in Germany, and the other is a Pennsylvania Railroad full dome (yes, it's a foobie!) from a fan who's layout is based on a contemporary "What If" version of the PRR that spans the continent.  I'm expecting a few more to arrive Sunday afternoon.
Look for a full report of the festivities sometime next week.
Posted by Lee Weldon at 11:57 AM