Spending some time with an old friend

To provide a foundation for this post, I should explain that in 1959, my dad bought a brand new Plymouth Belvedere right off the showroom floor.  He had been home from the army since about 1954, and had a good job as a freight clerk for the Baltimore and Ohio.  Since he was as yet unmarried, and still living in his parents' house on Highwood Drive in north Baltimore, he could afford to splurge a little.  I should note that the car was Fire Engine Red, with a white convertible top.

When dad was in the Army, he was stationed in what was then known as West Germany and he reached the rank of Corporal as an MP "protecting the beer halls for democracy" as he used to joke.  It was a small joke he would cast out with a twinge of melancholy, as this was during the Korean War, and many of his friends from high school and the neighborhood were drafted and sent to more dangerous places, some of whom never returned.

While stationed overseas, Dad became fast friends with John Simons, of Cleveland, Ohio.  After his service in the Army, John went on to attend seminary and become ordained as an Episcopal priest.  While he became an upright man of the cloth, he was also a gregarious man of great humor.   Long story short, after Dad left the service, he remained in touch with the Rt. Rev.  It wasn't long after the big Plymouth was in the driveway on Highwood that Dad got the call from his old friend to invite him to his parish in Parma to serve as Godfather to his new son.  (John and his wife Nancy remained close to my parents, although both John and my dad have passed.)

In so extending this invitation, the reverend set in motion a chain of events that led to today's adventure.  You see, my mom, Barbara, was John's parish secretary.  Imagine if you will, being a young woman of 26, and looking out your office window to see a long, red automobile sweep into the drive, tail-fins glistening.  With the top down, you see a splendid young man with wavy blond hair step out, and he politely greets you with a pleasant smile, sparkling blue eyes, and a strange accent that, at least in northern Ohio, might as well have been from South Carolina.  (Dad didn't really have an accent, at least not to our ears, but then we grew up in Baltimore, too!)  His face was tanned from the long trip up US 40 and the Pennsylvania Turnpike.  He must have seemed quite exotic.

So, anyway, one thing led to another, Barbara was swept away in the big red convertible, and they settled in Dad's home town.  Naturally, as we children came along, there evolved the annual ritual of traveling up to Cleveland to spend a week or so each summer with the cousins.  By the early 70's, Interstate 70 was gradually being completed, and we would speed along in a series of Plymouths, each gulping down more gasoline than the last.

Back in the days before the mind-numbing omnipresence of television, and this ridiculous modern philosophy that children need to be entertained every moment of the day, we did what came naturally.  This usually involved squabbling over who would sit next to the window, or complaints about the comparative proportion of this half a sandwich vs. that.  But for the most part, we would just press our noses against the glass and look out the window (provided, of course, that you were the one that won the window battle!)

Traveling west from Baltimore on I-70 in those days was a good illustration of why Maryland has long been referred to as "America in Miniature."  From the big city with the harbor and industry, you traveled to the Beltway, that most modern of conveyances that provided a gateway for massive suburban development.  Once on 70, you found yourself in rolling country dotted with dairies and horse farms.  Once you reached Frederick, you could see the first line of the Blue Ridge reaching up into the sky.  I remember imagining that it was really an enormous tidal wave ready to crash over the little town below.

After a couple of ridges, there was the broad Cumberland Valley, a tremendously fertile farming area marked by huge barns, hay stacks, and silos.  The silos always made this elementary school boy think of giant Thermos bottles for some reason.  Past Hagerstown, the more rugged  ridges of the Alleghenies began.  I knew my favorite part of the trip was close at hand when the two westbound lanes climbed high above the eastbound traffic, which afforded an excellent view of the railroad tracks that ran next to the highway just to the left.

How often it happened I can't recall, but I do have vivid memories of coming around that certain bend in the road just before Hancock, and seeing the headlight of an oncoming train.  I had no idea at the time, but this was the Western Maryland Railway.  I suppose my dad called this to my attention at some point or another, but at that age, I would have had no idea what he was talking about anyway.

There was a long siding there just east of Tonoloway Creek, which snakes down from Town Hill just east of Hancock.  My guess is that this was an important passing siding between Hagerstown and Maryland Junction, the two major terminals of the WM, so it wouldn't be unusual for a westbound drag of empty coal hoppers to be holed up in the siding to wait for the passage of a hot Alpha Jet going east.

As the 1970's wore on, and the Chessie System asserted itself as the new landlord over the WM, I noticed that I didn't see those headlights much anymore.  The main line was cut just west of Hancock in 1975, and all the WM's through traffic was diverted over to the B&O tracks at Cherry Run.  The line from there to Hancock remained in place to serve a couple of industries with local switching.  The long siding at Tonoloway became little more than a storage track for some of Chessie's decrepit fleet of poorly maintained freight cars.

With the passage of a few more years, business dried up for the shippers in Hancock, and the purpose of the line was called into question by Chessie's management.  In rapid succession, an application was filed with the ICC to abandon the route, followed shortly by an approval.  The scrap train was on hand before the ink was dry.  As a final insult, the handsome Hancock train station burned to the ground in a fire of suspicious origin.

As we got older, the trips to see the relatives became fewer and farther between, but I still had occasion to travel that way on business, or to go to a wedding or funeral.  But I still experienced the anticipation of possibly spotting a headlight, even after I knew there was no possibility of there being one.  Still, this remained a special place for me, and when I learned it had been converted into a "Rails to Trails" project, I knew that one day I'd have the opportunity to take a closer look at this stretch of railroad that so intrigued me as a child.

Today, well, Yesterday was the day.

My son and I embarked on a camping adventure earlier in the week after Laura and my youngest, Julie, went to Disney World thanks to the huge volume of Girl Scout Cookies that was peddled by her troop.  After spending the night in Brunswick, Maryland, we headed to Hancock for our second night.  So Thursday morning, we struck our tents, loaded the bikes back on the rack, and headed to downtown Hancock for lunch.  I decided to ride on the rail trail going east, then cross over to ride the C&O Canal towpath back to town.  The round trip was about 17 miles. 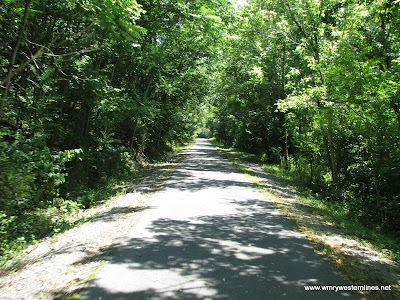 I managed about 8 miles out of 22.5 on the WM Rail Trail out of Hancock.  If you're a low level bicyclist like myself, this trail is a dream.  Fully paved, barely a grade (Thanks to the outstanding 20th Century engineering of the WM), and absolutely bucolic surroundings... save for the roar of I-70 most of the way going east. 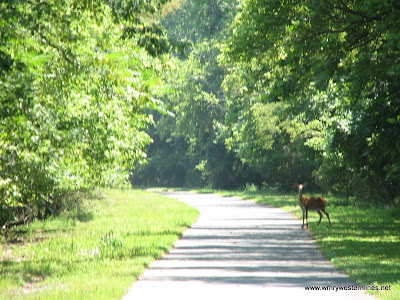 Apart from one couple I encountered going west, this was the only other "hiker" I came across on my ride.  After I switched over to the canal for the trip back, she reappeared with her fawn.  I'm definitely heading back up there as soon as I can to ride the rest of the route.


While I would have probably enjoyed it more to see some speed-lettered diesels barrel through with a fast freight one more time, I have to say it was nice to get up close and personal with this stretch of right of way that was responsible for a whole slew of childhood memories.  And maybe, just maybe, for the rest of the stuff you've read about here...
Posted by Lee Weldon at 3:22 AM