How fleeting the summer has been...

Here we are just past Labor Day, and the only thing I can report is that I don't have much to report!  Since our camping trip back in July, I've been busy tending to lots of other business, some of it pleasant, some of it not so much.

For those of you living on the east coast, you know that in a one week period we had a little earthquake followed by a not so little hurricane, followed by a three day gulley washer thanks to a tropical storm named after me.

You'll be pleased to know that the railroad survived all of these catastrophes more or less unscathed, although I did have to go up and right some of the rolling stock that tipped over in the quake. 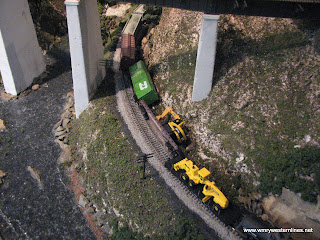 This was the worst of it.  There were a couple of other cars knocked over in the yard, but nothing major down in staging, which I was worried about.  At any given moment there's upwards of 150 cars stowed below decks, and I had visions of a major catastrophe down there.

After the shaker, Hurricane Irene came through, and the major effect there was the power going out for about 18 hours, which meant another weekend without getting some decoders done that I owe people...  No juice, no soldering!  Tropical Storm Lee had more impact on the west side of the Chesapeake and on up into Pennsylvania and New England, so other than a couple of stray showers, that left us alone.

A few weeks earlier, I finally completed a project that had been put off for quite a long time, a wagontop B&O caboose for the Brunswick Railroad Museum in Brunswick, Maryland.  They have a little N scale layout in the front window of their gift shop, and Tom Simpson, one of their directors as well as an old high school bud, asked me to whip something up for them.  I'm going to see if I can help build a more B&O appropriate layout for the front window.  The shot below was taken on my layout before I shipped it up to Tom to ride around on the Unitrak loop they've got there. 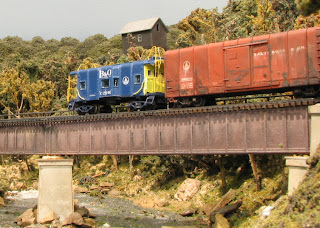 One other thing that I did get done was some work on a few commercial vehicles and pick up trucks thanks to a generous gift from one of my crew members.  He had stockpiled a bunch of cast pewter kits in anticipation of a layout that now likely won't be built, so he sent them along to me.  So I started tinkering. 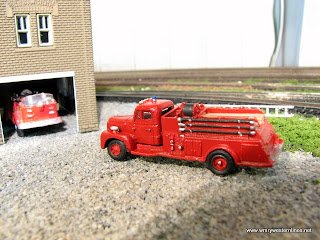 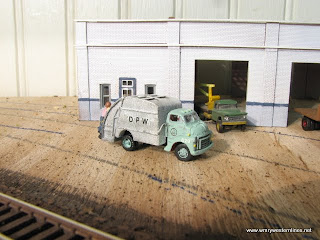 There's more, but they're in varying stages of completion.  There's a whole gang of Chevy cabs that I thought would look good on one of the open auto racks, but that will strictly be for photos.  The cast pewter models add way too much weight to the car to be practical for running.  It might work on an N track run that's relatively flat, but the grades on the WM Western Lines would definitely cause the experiment to end badly.

That's all the news that's fit to print for now.  With the weather cooling down and outside projects tailing off, I'm hoping to spend some more time in the train room finishing a bit more of the many projects that I've started.  But I'm not in a big hurry.  I understand that if you finish everything on your "to do" list, you die!
Posted by Lee Weldon at 11:09 PM