That title ought to drive the search engines a little nuts...
I'm starting to get excited about building out the Cumberland section of the layout.  Urban scenery presents a fair amount of challenges, and for me one of those is getting some unique flavor out of the buildings.  Design Preservation Models and Walthers Cornerstone are good models to start with, but frankly, I get weary of seeing the same buildings on everyone's layouts...  You can personalize them a little with some paint and other details, but the variety has become a little limited, especially if you're planning a reasonably large urban area.


Fortunately, over the years, I've never thrown anything away.  I've done a lot of kitbashing, so there's gobs of leftovers, everything from whole wall sections to sprues of windows and doors.  I also keep a good stock of strip and sheet styrene, so in a pinch, I can fabricate whatever I might need.
So I dove head first into the parts bin... and came up with this: 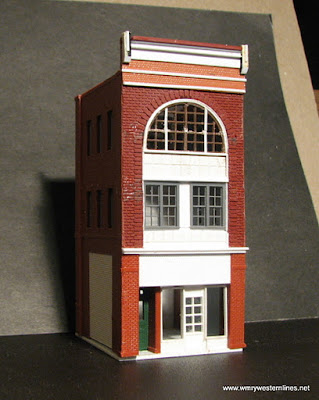 I should first explain that I had some help from my friend Paul Hutter, who lives in Cumberland, and who went on a mission to get some pictures of buildings along Baltimore Street, the old main drag through town.  He provided some outstanding examples, several of which are far beyond my modeling capabilities...  But with a little smoke and mirrors, and plenty of stuff accumulated over decades of model railroading, I don't think I'll have a problem breaking up the monotony of the usual DPM parade...

Downtown Cumberland has some magnificent examples of late 19th/early 20th century architecture, and many of the main street buildings are very well preserved.   Here's the pair I'm simulating...

I love the faux stonework on the one on the right, and the bold arch of the hobby store building is awesome.  I'll be trying to get the flavors closer as I paint and further detail the buildings, but obviously, I'm not trying to build inch for inch replicas.  While DPM structures are pretty versatile, they're also quite "vanilla".  While they offer several footprints, and a some halfway decent larger buildings, the window patterns, the details and the overall styles of the models are pretty similar.   Like today, architects of that era often pulled their details from a catalog, so in a sense, this approach can be prototypical.  But in larger towns that found themselves in a "boom" of prosperity, you'd be more likely to find the kind of bold architectural statements such as the ones shown above.

Anyway, I scavenged parts for a couple of kits, rounded up some DPM modulars for the side walls, and otherwise filled in textures and shapes to get close to the flavors shown in Paul's shot. 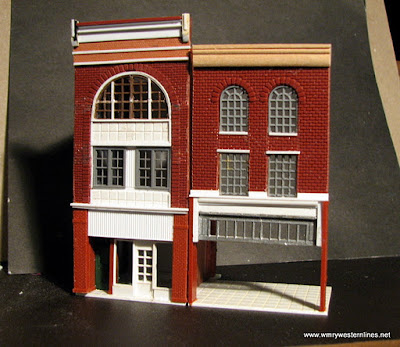 I'm still working on them both, I'll come back and drop in a more finished view when they're ready.

Bear in mind that my main street will be about 3' long, so there will be quite a clutter of buildings once it's done.  My goal is to do a couple key buildings that capture the essence of Cumberland's streetscape, then use the usual suspects to fill in the blanks.

I'm giving most of the attention to the facades, because as you can see, the buildings are pretty much cheek by jowel.  These will back up to the curved skyboard that encloses the Thomas sub helix, and will be placed closer to the rear of the scene.  I like their three story elevations, and the arched windows.

To make the facades, I started with half of an old Heljan engine house to get the big single arch.  I clipped out the pockets designed for the door "hinges" and simply shortened the opening as such.  I used the doors to build up the arched windows, adding some strip styrene to fill in the gaps.  A couple of Gloor Craft dual windows sufficed for the second floor.  The first floor is all scratched out of strip styrene, with a couple of door and window frame castings to finish it out.  I used DPM Modular walls cut in half to make the side walls, and blank sheet styrene to make the unseen rear of the building.

I just started the second building this evening, but I'll be adding the storefront next chance I get.    You may recognize the twin arch windows as coming from the back wall panel of the Walther's Union City Roundhouse.  (Recall that I accumulated about a half dozen of these kits to build the bones of my 22 stall roundhouse at Ridgeley, so odds are, you'll be seeing these windows again!)

There are several "signature" buildings on the street that I want to include, which will help viewers familiar with Cumberland to feel at home.  This big bank building, for instance:

Having the first floor squared and the remaining stories rounded on the corner make this immediately stand out.  It will be fun to experiment with different materials to see if I can get that effect to work in N scale.

Another would be Peskin's, which I assume was a department store.  The variety of window styles, and the big Art Deco sign board give evidence of both the building's original vintage as well as one of its commercial revivals.


The more modern buildings to the left and right will add more authenticity to the scene.  Afterall, a downtown isn't a static thing.  There are always buildings being built, torn down or remodeled as the fortunes of the neighborhood ebb and flow.  My 1970 era could be considered the end of the mid century boom for Cumberland, but before the hard times that followed the closure of several major employers later in the decade.

I'm looking forward to working with the Townbuilder Series from NZT Products and Stonebridge Models.  It will be nice if they move beyond the plain vanilla styles offered by DPM and Walthers, and provide us with some more interesting downtown buildings for our towns.  Afterall, in our smaller scale, we have room for a wider variety of buildings.