Begin at the End: The Line to Elkins 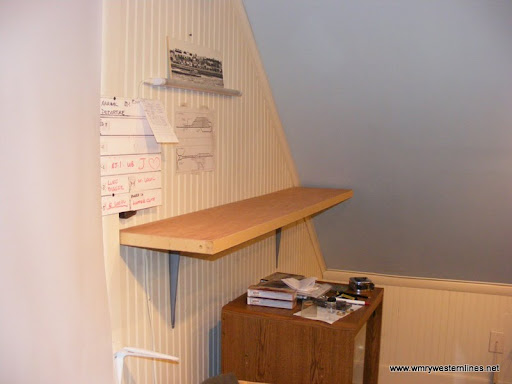 It is said that the journey of a thousand miles begins with a single step. For my expansion/reconstruction project, the first step was to build what will ultimately be the most remote part of the railroad, a small yard representing Elkins, West Virginia.

The yard is located on this rather austere looking shelf, which is composed of a 12" wide hollow core door (graciously donated to the cause by Dave Foxx) that is cut back to about 4'8" long. Since my new plan involves some considerable grade changing acrobatics, I wanted to make sure I knew where the highest elevation point would be, and this would be it. The Elkins yard deck sits at 50" above the floor, about a foot higher than the main level.

The real Elkins was a compact yard by most railroad standards, even when compared to other WM facilities at Knobmount or Hagerstown, but it was still too big to model comprehensively in the space I have available. In addition to the yard functions, Elkins also hosted the WM's primary car shops, caboose shops, and a 17-stall roundhouse. My original plan hoped to include tracks to represent many of these functions, but the re-draw forced me to do away with most of it. Now, Elkins is represented with a simple five track stub yard, a two stall engine house, and an Arrival/Departure track that will adequately launch trains of roughly 20 cars. 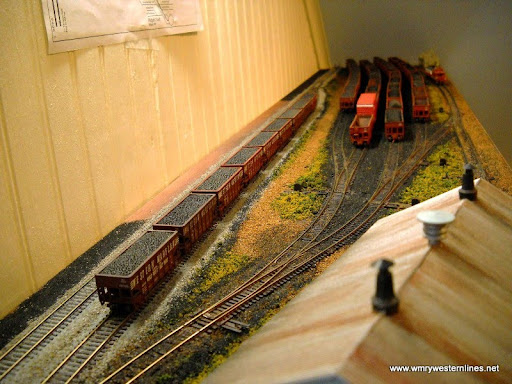 To attain this level of elevation, I needed to devise a simple three-turn helix, which was made not-so-simple by the fact that the layout resides in my attic. As such, I had more room for the bottom turn than the top! Since the Thomas Sub to Elkins on the real WM was a twisting, steep railroad, equipment was limited to short wheelbase locomotives, and relatively small cars, I was content to make the helix of a relatively tight radius and steep grade. The WM's fleet of 34' 55-ton hoppers survived well into the 1970's due to this geography, as did its relatively ancient stable of RS-3's and F-7's.

The top turn has a track center diameter of roughly 24". The middle is an oval, 24" x 27", and the bottom rounds out at 24" x 30". The ever widening dimension tucks back under the sloped ceiling. 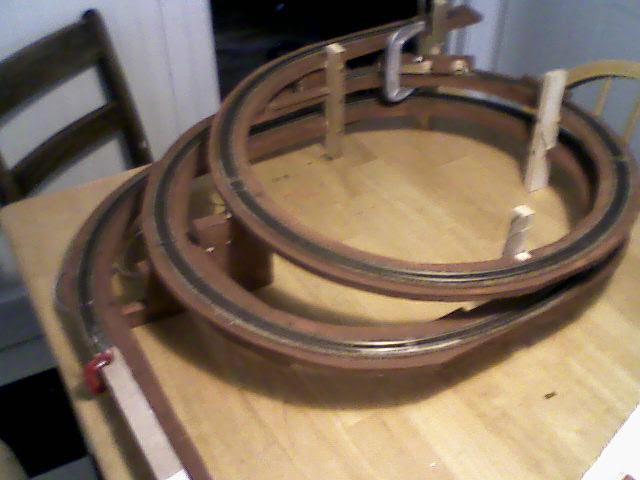 (Pardon the blurry image... I shot this with a camera whose manual has thus far evaded my eyes). To connect the two pieces, the yard and the helix, I built two narrow shelf modules to cross the window that occupies the center of the room's main vertical wall... These comprise the long passing siding that serves as the A/D tracks. I've included a crossover in the middle of the siding, which adds a bit of flexibility when setting up outbound trains, and juggling switching duties with an incoming drag of empties. 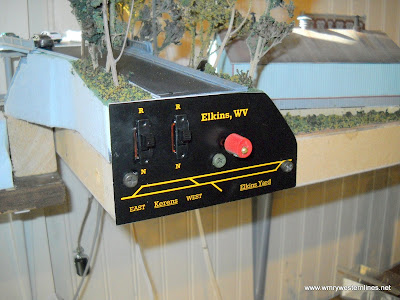 The siding is... or rather will be... controlled from this small panel that I stuck into a highway embankment.


The switches at the east and west end of Kerens are operated by yet-to-be-wired Tortoise switch machines, while the yard entrance and the west end of Elkins are manual. There are a quite a few steps to take before this work is connected to the main layout, primarily the relocation of my workbench to the other side of the room. Once that's done, I can construct the benchwork for Cumberland, which will in turn permanently support the Thomas Sub helix. Until then, I can goof around setting up trains and running them in and out of the yard.