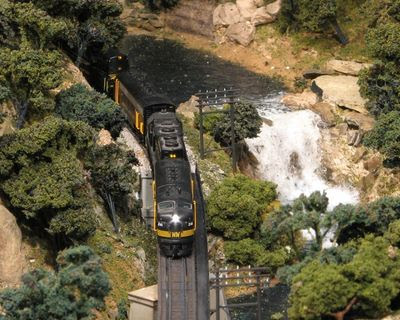 After 5 years or so of running the N Scale Western Maryland Western Lines layout in it's "temporary" configuration, it's finally time to start the process of building the new improved track plan. This seemed as good a time as any to open up a new blog to share the progress of the work as it happens.
For the past few years, I had an ongoing thread about the layout on Scale Rails Online, a model railroading forum that covers the broad spectrum of the hobby. Unfortunately, in the spring of 2010, the site was hacked, and all the layout progress blogs, including mine, got lost in the ether.
So here we are then.

To bring you up to speed, around 2001, I started designing a layout to fit in a spare room in my attic. The N scale plan was designed to represent the Western Maryland Railway's west end, from the major terminal at Hagerstown, Maryland, through Maryland Junction where the line splits with the main line continuing on to Connellsville, Pennsylvania, and the Thomas Sub branch to Elkins, West Virginia. In retrospect, the plan was a mess: 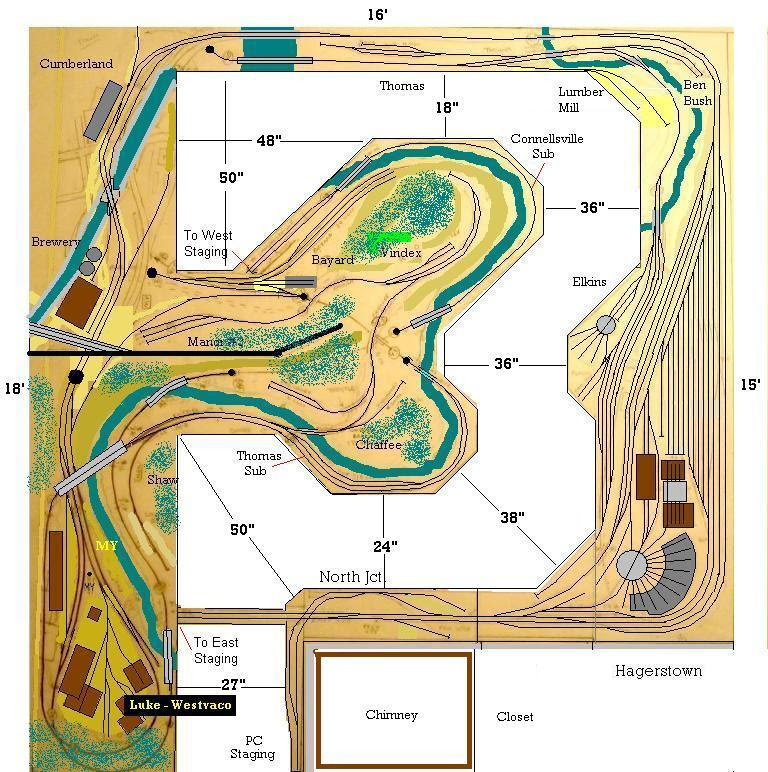 In a nutshell, some of the grades were unworkable, the staging was impractical, and the aisles were way too narrow. But I didn't know any of this at the time, so I plunged headlong into building the first major part of the layout, believing that I could work out the kinks as I went along. So off to the garage I went, and over the course of a year, I built the section in the lower left, including the Westvaco Paper mill at Luke. The construction process is covered here:


The basic frame came from a former layout, and I started with a staging yard, then added the upper, scenic level. Once this section reached a state of completion, and the room it was going in was ready to receive it, I recruited my neighbor Tom to help me load it up the steps. 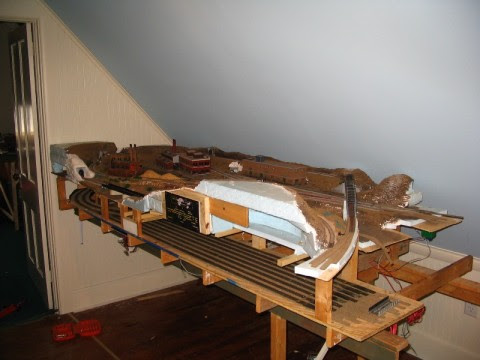 Once this step was taken, I realized that I absolutely positively had to figure out a way to run trains. Thus, a temporary set of loops was built to close up a circuit. Well, one thing led to another, and soon I had scabbed together some scenery, a connecting line that tied the paper mill scene to the staging yard below it, as well as a working yard and engine terminal... all of it temporary. This little slide show covers much of the temporary sections, including the paper mill scene:


It all seemed to work pretty well, so I began hosting some operation sessions, inviting some members of the Railwire Forum community to try it out. We had a lot of fun with it, and that led me to prepare an article for publication in N Scale Magazine. This appeared in the September/October 2009 edition.

Despite the fun we had, the operating sessions revealed some serious problems with the temporary track plan, and also raised some concerns about how the original track plan would work, particularly in regards to staging. So, in 2009, I began working on a major revision of the plan to address these problems. And that's where we are now. The new track plan is posted on the layout website. I've changed the staging to "balloon" style tracks at the east and west ends, I moved Elkins to an upper level away from the Ridgeley Yard, and added a couple of helixes to add some operating distance, and help with the grade separations. There's still a few kinks I'll need to work out, but I think I solved most of the operational problems.