Staging: The Alpha and the Omega of a Model Railroad. 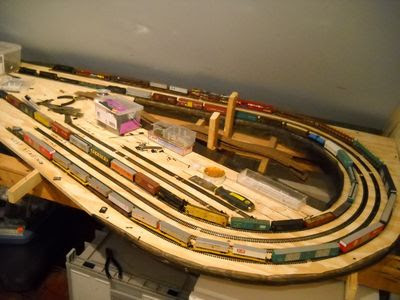 Back in February, two of my regular crew braved the threat (and ultimately the onset) of a blizzard, and came down to help me construct and install the base for the first phase of the expansion project. It consisted of a large staging yard, configured as a "balloon" track, which basically forms a reverse loop so trains that exit the modeled part of the railroad can return from the same direction. This is the biggest improvement I'm making to the layout, and actually is the driving force behind many of the other changes.

The operating schematic of the railroad is basically an extended "X" shape. The two legs to the east are represented by a single staging yard, while the two legs to the west are divided into two separate routes. The northerly route suggests the WM's Connellsville Sub, extending from Ridgeley Yard (my on-scene working yard) to Connellsville, PA, represented by the new staging loop. The southerly route represents the Thomas Sub, which originated most of the coal hauled by the WM. This route also extends from Ridgeley, then splits from the main at Maryland Junction, then on to Elkins, West Virginia. Elkins is represented by a small active yard where operators will be kept busy marshalling coal loads for various destinations in the east and midwest.

Anyway, one of the key objectives of this project was to improve the staging I had available. I had included eight through tracks in the original plan, and even built it out, but this quickly proved to be an issue. First, eastbound trains would leave the layout going east to destinations such as Baltimore or Lurgan, but in the original plan, they would arrive back on the layout at the west end from originations like Pittsburgh, Toledo, or Chicago. Okay, that would be easy enough to fix by writing the car cards and waybills carefully. The problem became power swaps. The WM was notorious for its run-through agreements, and at Hagerstown on any given day, you could see engines from 5 or more different railroads. Even this isn't that bad, just mix it up, right? 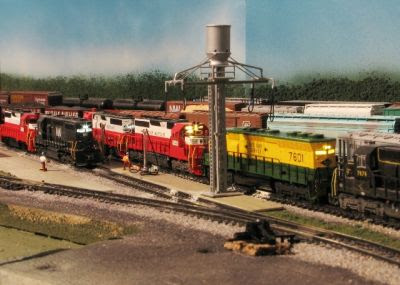 Wrong. Reading Company power would come to Hagerstown from the east, then go back to the east. N&W engines would come in from the west, and either go back the way it came, or switch over and head south on the Shenandoah Valley line to Roanoke. B&O power would arrive from Cherry Run, west of Hagerstown, but wouldn't show up on WM rails west of there. So you see the dilemma. I couldn't very well have a train with Reading power appear on the layout at Connellsville, nor would a Norfolk and Western unit grace the rails east of the yard. Balloon staging solves this. What goes east, comes back from the east, and likewise to and from the west. It also makes writing waybills a lot more logical.

The biggest advantage to the new configuration will be the huge increase in capacity the railroad will now enjoy. Before I had eight staging tracks, with an average capacity of 16 car trains. Now I'll have upwards of 20 staging tracks, with the through tracks able to handle 30 cars or more. This means I can schedule more trains that are longer, and cover more destinations. It also means I have to expand the capacity of the active yard to handle more and longer cuts of cars bound for a broader range of destinations. Working on improving the yard at Ridgeley will be a whole other topic!

But enough about me. If you don't think you need staging to enjoy your railroad more, I'm going to politely suggest that you're dead wrong. Even the smallest roundy roundy can benefit from a switch and a few tracks off to the side that provide a place for traffic to come from and then go to. A simple shelf switching layout is really dead in the water unless you can push the outbound cars "off stage" to make room for switching cars that are in the scene. It just makes your model trains work more like a model transportation system. Granted, my staging needs are a bit elaborate, but that's based on the traffic patterns supported by the railroad I model. But staging doesn't have to be.

So sharpen your pencil, and see if there's not a way to tuck a few sidings out of the way to give your trains someplace to go.
Posted by Lee Weldon at 8:07 PM