Last night I re-wired the staging yard to account for the reverse loop. I still have to add a few drops, and the eastbound throat needs rebuilt, but we're not too far away from having the staging tuned up and ready to be buried. I test drove a 4 axle, then a 6 axle, then the big 4-8-4, and so far so good. The only problems that turned up were in the old section that I already knew about.

Next, this morning I rebuilt the area around Shaw. This is where the original section of the layout joined the temporary section, and the benchwork was a scabbed together mess. I needed to change the elevation, since the grade would be ascending here now, instead of descending as the temp loop had it. I also wanted to replace the subroadbed with proper 1/2" plywood, instead of the 1/4" paneling/3/4" foam sandwich I used originally. Here's what it was: 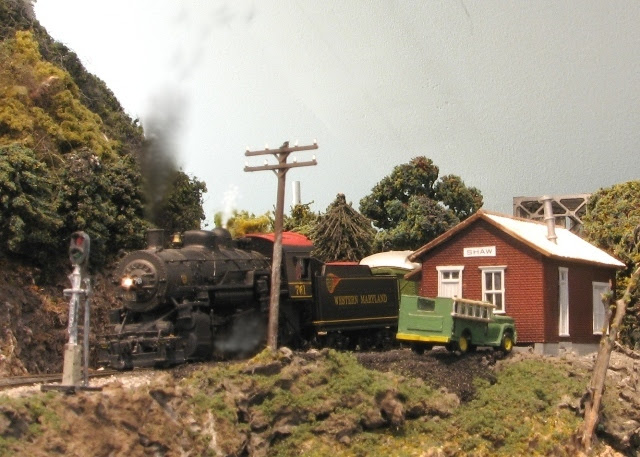 You can see pretty clearly that the engine is headed down grade. The point where the locomotive is in that picture is now about a full inch and a quarter higher than it was. 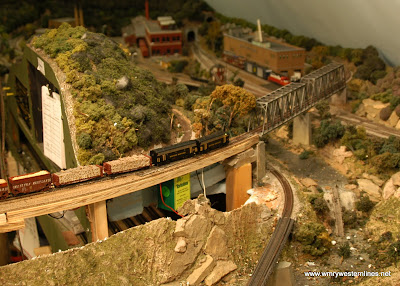 You can also see that I've made provision to add a Tortoise to run the siding at Shaw. There will be two short passing tracks on the Thomas sub, on either side of the scenic divider. Probably long enough to handle about 15 cars, or 20 55-T hoppers. I'm going to put the controls for both at the end of the peninsula so one tower operator can control movements on both sides. The switch into the truck dump at Shaw will remain manually operated by the train crew. 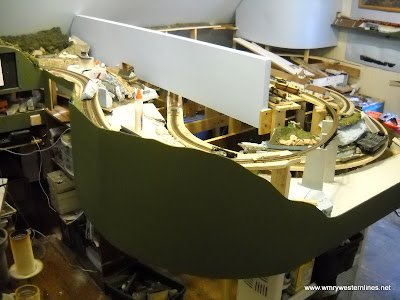 This shot reveals that the alignment will remain the same through the junction, just at a higher elevation. 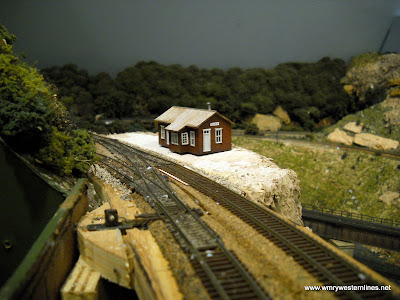 The grade change has put the truss bridge at just about level. Compare this to the old view: 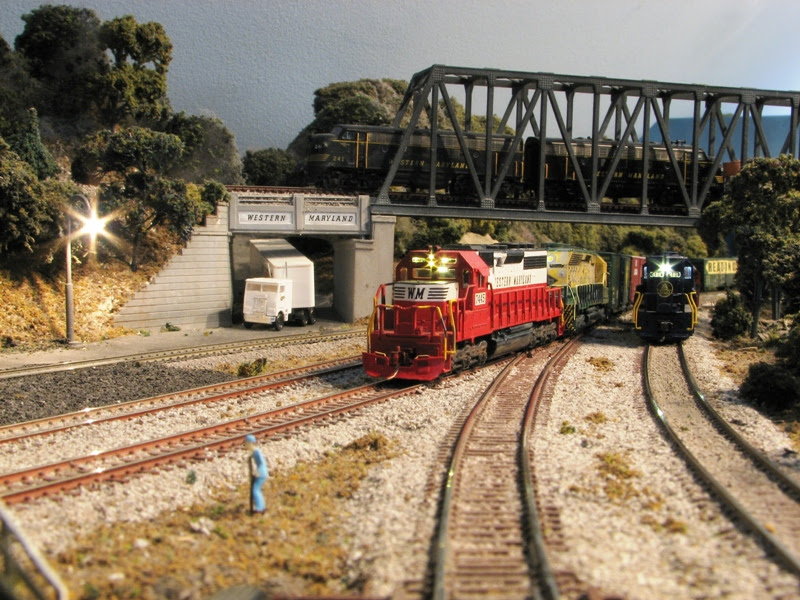 The bridge originally dropped about 3/8" from left to right, which was to accommodate the original track plan. I grew weary of having to adjust photos to compensate for the stiff grade, and I'm glad to be rid of it. Now I just have to build up the center pier, which now will have room for proper bridge feet. 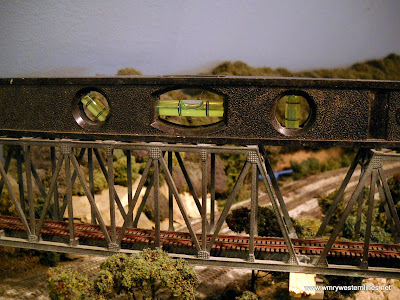 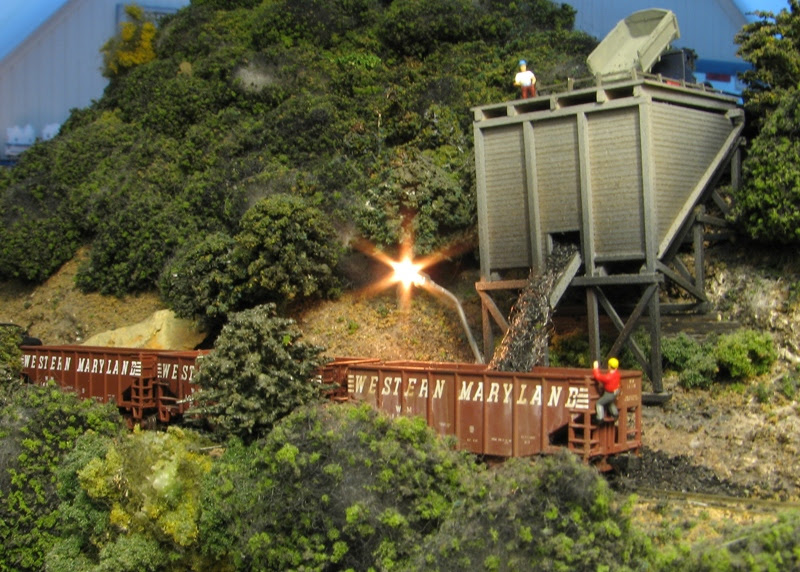 Here's the track to the Shaw truck dump. I think I'm going to re-purpose this siding as a sand load out. There was a source for silica sand near Shaw that was shipped to PPG in Cumberland in two-bay covered hoppers... I sure have a lot of them, and this will put them to good use. I'll carefully relocate the truck dump over to Thomas on the other side of the peninsula. You can see in the picture that I filled the void left by the grade change with some HO scale ballast I have laying around. I use this a lot for filler. I just dump it through the track, brush it out so it's all below the ties, then apply my glue soup to it. Once it sets up, I go back over it with N scale ballast and scenic materials, and when it's done, it'll be nice and blended in.

I'll have to get some of those clip strips for the Tortoise here, because it's located smack dab over the staging yard, and there's no way I'll be able to wire it from underneath. This will also be the first pairing of machines that will get the decoder experiment. I'd also like to apply some simple signaling here. (open-green, closed red) probably as fascia indicators since the Thomas Sub was TO/TT territory. A working TO signal would be fun to have at Shaw, too, and this is where the lighted TO stand from Williamsport Jct. will likely end up.

I'm trying to get all the connection elevations set so when the crew comes down for a work day all the math is already done.
Posted by Lee Weldon at 10:51 AM