I confess, I'm a pack rat. I don't throw anything away that has even the tiniest chance of being re-used. This is true in my house, which is over 100 years old. My garage is chock a block with old light fixtures, plumbing parts, pieces of lumber and scraps of drywall. Any of which might become the cornerstone of some project critical to the improvement of our lives.

This is also true in my work. I'm the manager of a soon to open Habitat for Humanity ReStore. We specialize in collecting donated building materials and home improvement wares that are cast aside by builders, retailers and homeowners, then tidying them up and re-selling them at a discount to raise money to build houses. This is a great job to have if you're a scavenger like me.

And of course, the reason you're here, this is a key component of my life as a model railroader. Last night I began the process of "deconstructing" a large part of my layout. Naturally, this meant getting reacquainted with some old friends. 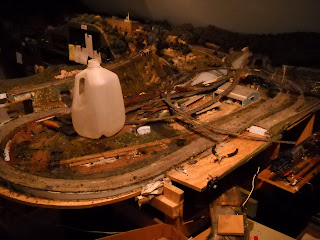 Like the plywood curves that I originally cut in 1989 for my original Laurel Valley layout. And the old phone jack that once connected a lift out section to the main electrical system of my mid-90's vintage work. There's the cat-5 cable that I purloined from my old office, and the dozens of drywall screws that I've driven in, then out again, over the course of four or five different layouts.

The grand daddy of them all, though, is the hunk of Homasote that has been a part of different layouts I've built dating back to the early 1980's. Underneath the current tangle of switches and rail, ballast and ground foam, are shadows of numerous previous track plans. Today it's down to a roughly 18" triangle that supported the Williamsport Jct. area. It started out as a 4' x 7' panel, which was itself salvaged from a previous life as an office partition. When I was in high school, I worked in the Candler Building in Baltimore, which at the time was a big loft industrial building. It housed large commercial printers, a men's clothier's sewing plant, and a variety of other warehouse and office functions. My job was to help clear old tenants' stuff out of the way to provide a clear space for new tenants. As my colleagues tore into the floors and work stations with their crowbars, there I was with a Phillips head screw driver and a small pry bar, carefully dismantling this partition, eager to lay it out flat and start planning a model railroad.

My plan was to hang it on the wall in the garage, so it could be folded up and out of the way should the Old Man ever decide that the LeSabre should spend the night indoors. I don't have any record of the track plan, but I remember it being pretty cool, and set up for a modest amount of operations. The 4' wide thing ended up being its demise, since there was an important crossover that I just couldn't reach. Well, that and I went away to college.

Before I left, I cut the Homasote into 2'x 4' panels, with one 1'x4' piece left over. My plan was to build a modular, or rather, sectional layout in my room. Lots of sketches exist, but nothing ever came of them. I did take one of the 2'x4' pieces and whipped up a fun little Christmas garden after I got married. I held on to the other pieces, of course. When we finally moved into our first proper house, I had a spare room to work with, so I erected a tidy little layout that used the Christmas garden as the basis of it, then I used the other pieces to add a branch line and a small yard. That didn't last long, though, as it was determined that Daughter #2, newly arrived in 1991, would require the train room to be "re-purposed."

A few years later, we moved into a house with a proper basement, which turned into a bonanza! There was a family room and laundry room, so I commandeered the wall that separated the two. I built my detailed city scape and yards in the laundry room, which could be closed off to the little urchlings my wife tended to in her daycare. On the family room side, a dramatic scene of the Allegheny Mountains was planned, and partially executed. In the end, the house (which was rented) was sold out from under us, and again, the now ever smaller bits of Homasote were pulled up and packed into a box.

Parts of this old reliable panel were included in the Western Maryland Ry. Historical Society's N scale layout that I worked on back in the late 80's as well. Some of it ended up in at least one friend's layout. I used one piece as a base for a school science project, another shimmed up the leg of a wobbly table. It has served long and well.

I'm sure I'll have a place for it in this new plan somewhere, even if it's just a block to hold up a tunnel portal.
Posted by Lee Weldon at 12:38 PM